Home improvements Are Key To Community Revitalization In Southwest Baltimore

Born and raised in West Baltimore, Donald was one of 10 children. His father came to Baltimore from Charleston, West Virginia and his mother grew up in Maryland. His formative years coincided with World War II and the aftermath of the Great Depression. He recalls waiting in lines with wartime ration stamps for household items like sugar, bread, cheese, wood, coal and oil.

Donald started working young, scrubbing the marble steps at a local funeral home on the weekends to help support his family. His father worked as a chauffeur for a wealthy family in Guilford, where Donald would periodically shovel snow for extra money.

The local Baptist church is a place he remembers fondly from his youth. His neighborhood church brought the community together in worship, community service and recreation.

Donald gleefully describes growing up in Baltimore as "back in the day.” A time when streetcars and arabbers sold fresh fruits and vegetables from horse-drawn wagons maneuvered through Baltimore City streets and neighborhoods. At 14 years-old, Donald joined the trade after school as an assistant to seasoned arabbers. Within three years, Donald ran his own wagon, collaborating with other arabbers to purchase an entire trailer of produce then dividing up goods for their routes.

When Donald was not running his wagon with food, he sold wood and coal by the bushel and ice. Many arabbers, like Donald, filled their wagons with sheet metal, aluminum, brass, inner tubes, newspaper, cardboard, wood from torn-down houses and old clothes to sell to junk shops and metal yards for extra money. He remembers that "back in the day,” everything was reused.

In his 20s, Donald began a job at a local appliance store, unloading trucks. Donald loved his job at the appliance store. He still uses the refrigerator and Hardwick Charlet stove, fully equipped with a top warmer he bought on the job 30 years ago. He loved the store and his co-workers. Generations of families bought appliances from him. 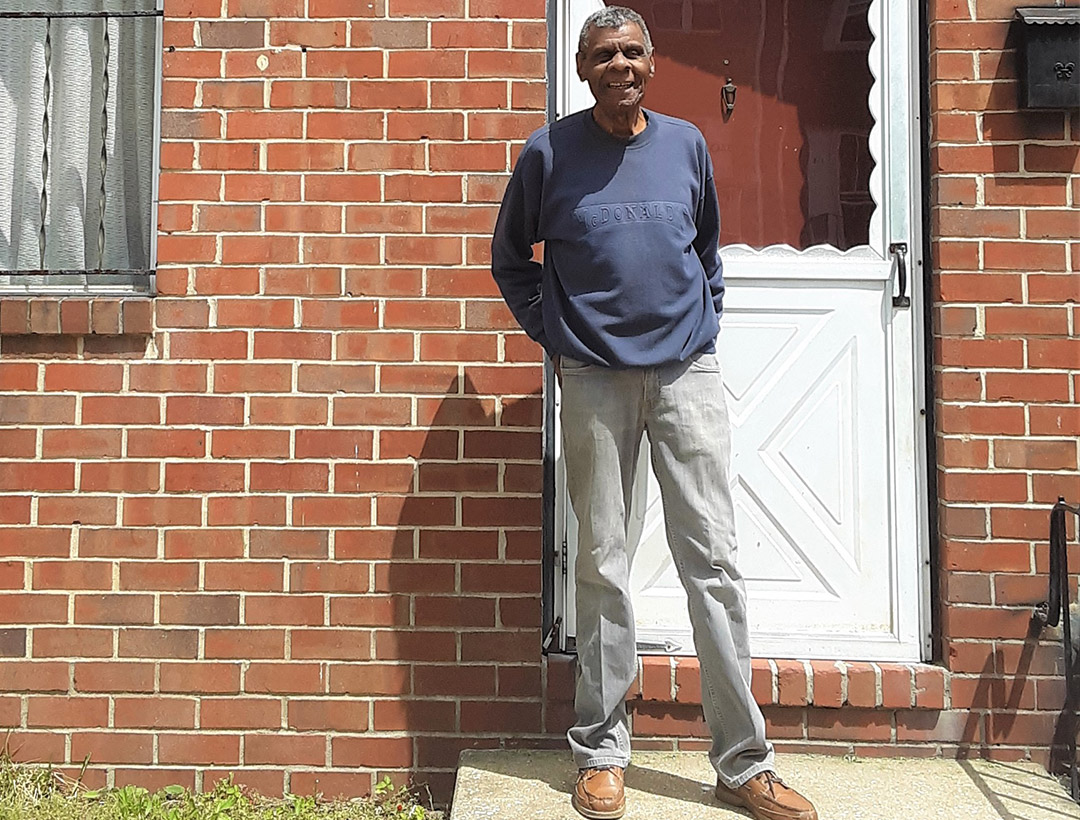 Donald moved into his current home in 1986, with his sister and her three children. He purchased his house through a program that built homes for lower-income families—wedged between three-story rowhouses; his two-story home served as a sample home for the program. The program fell through but Donald placed a bid for the sample home and was accepted. He was excited to live in the same neighborhood as Ruth Kirk, a long-time state delegate and community activist, whom Donald knew as a teenager.

Today, Donald lives alone. His sister moved out several years ago, and her children now have homes and families of their own. Fortunately, his daughter lives down the street. The church and community service are still central to his life. He volunteers serving food and cleaning up at the church's cafeteria. Donald is proud of his home and community; and although the neighborhood has changed, he still knows most of his neighbors.

Donald envisions himself living in his home for the rest of his life so making sure it is safe and healthy is very important to him. When the home repairs he needed cost more than he could afford, Donald contacted Rebuilding Together Baltimore for assistance.

With support from Lowe’s, Rebuilding Together Baltimore is repairing Donald’s roof, which is degraded from age and caused water to leak into his home, installing new carbon monoxide, smoke detectors and a fire extinguisher to upgrade his fire safety and securing the front railing on his porch to prevent falling.

The repairs made to Donald’s home are part of a $2 million investment that includes critical home repairs for 45 homeowners in Southwest Baltimore. The multi-year project, facilitated by the U.S. Department of Housing and Urban Development in collaboration with Rebuilding Together Baltimore, Lowe’s, Southwest Partnership, Inc., City of Baltimore and the University of Maryland, Baltimore, aims to improve economic mobility in Southwest Baltimore by addressing affordable housing and driving skilled trades employment in the community.

“Getting my roof fixed relieves the tremendous stress I have been carrying because of the water leaks,” Donald said. Recently, Donald noticed neighboring homes that are boarded-up. Just blocks away, developers are tearing down functioning houses and displacing families while abandoned and blighted homes remain standing, threatening neighboring occupied homes’ structural integrity. Donald’s home is his legacy; he’s thrilled and thankful for the repairs knowing that he can age in place in the home and community he loves.